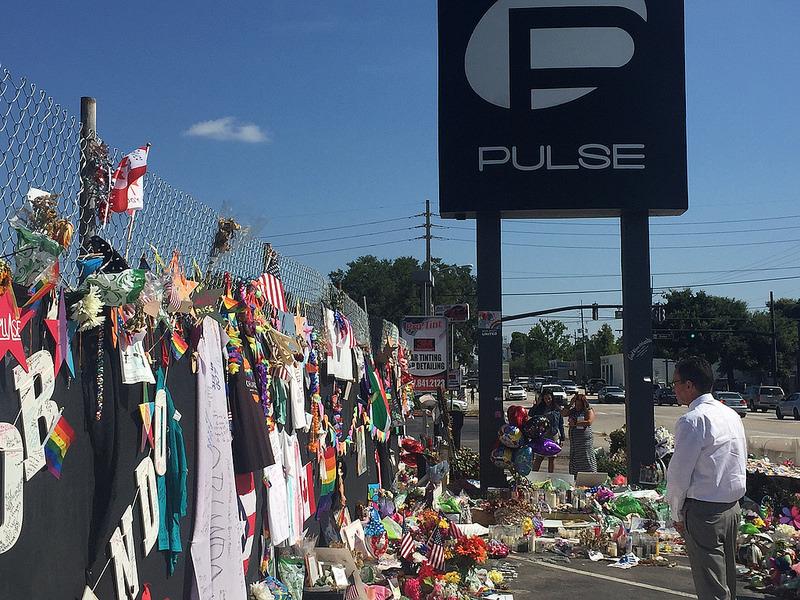 Orlando FL March 24 2017 Dozens of surviving victims of the Pulse nightclub shooting, along with families of those who died, filed suit Wednesday against the shooter’s wife and his former employer, saying they knew he was mentally unstable and threatening violence.

Victims and their family members gave emotional comments in a news conference Wednesday in Orlando announcing the suit.

Juan José Cufiño, who was shot four times, said the attack changed him emotionally and physically. He was the last victim to leave the hospital after 114 days.

“I will not be able to continue to pursue my profession as a tailor because my right hand is unable to trace patterns or cut fabric,” Cufiño said, sitting in a wheelchair. “We all deserve to know why Omar Mateen’s threats were met with silence.”

All of them expressed outrage at the fact that people apparently knew the shooter was unhinged and threatening violence. Attorneys said they hope the lawsuit becomes a platform for more discussion about preventing terror attacks.

The suit, filed in Fort Pierce federal court, seeks unspecified compensation for victims and their families, including medical and funeral expenses, loss of support and possible other awards to be determined later.

It alleges that the G4S security firm had knowledge of Mateen’s mental instability and intent to harm before the shooting. The suit alleges that the company maintained its stance that Mateen was psychologically sound and fit to carry a firearm on the job as a security agent.

Despite troubling statements made to coworkers, the lawsuit says, the company failed to comply with its own internal protocol to report changes in Omar Mateen’s mental health and seize his weapon. The mental health validation issued by his employer was reviewed by Florida officials before Mateen purchased the weapons used in the Pulse nightclub tragedy, the suit says.

The suit also mentions the fact that G4S has been fined by the state of Florida for falsifying mental health validations for other employees in the past. The company was fined $151,400 in September by The Florida Department of Agriculture and Consumer Services for falsely listing psychological testing information on more than 1,500 forms over a span of 10 years. G4S had listed the name of a psychologist who no longer practiced on forms that allowed employees, including Mateen, to carry guns.

The suit says Mateen’s wife, Noor Salman, also had prior knowledge of his violent intentions and did not report him to authorities.

“The evidence we’ve seen clearly shows there were multiple warning signs before the tragic Pulse nightclub shooting, and we believe those named in this complaint — the employer of Omar Mateen and his wife — could have and should have taken steps to prevent this senseless act of violence,” said lawyer Antonio Romanucci, who is handling the suit. Mateen and his wife lived in Fort Pierce before the attack.

G4S is the world’s largest security company, headquartered in Britain, and its U.S. subsidiary, G4S Security Solutions, is based in Jupiter.

G4S said in a statement responding to the lawsuit that it continues to have the deepest sympathy for the victims, families and friends who were affected by the Pulse nightclub shooting.

“G4S intends to vigorously defend itself against the lawsuit, which it considers to be wholly without merit,” the statement said.

After the shooting on June 12, G4S released a statement saying that Mateen had worked for them for several years.

“We are shocked and saddened by the tragic event that occurred at the Orlando nightclub,” the statement read. “We can confirm that Omar Mateen had been employed with G4S since September 10, 2007. We are cooperating fully with all law enforcement authorities, including the FBI, as they conduct their investigation. Our thoughts and prayers are with all of the friends, families and people affected by this unspeakable tragedy.”

Salman was arrested in January, about seven months after her husband opened fire in the Orlando nightclub, killing 49 people and injuring at least 68 others. She is charged with aiding and abetting her husband. Mateen was killed in a shootout with police about three hours after he first started shooting at the LGBTQ club’s Latin Night celebration.

The lawsuit describes disturbing comments and threats Mateen allegedly made to coworkers when he worked as an armed guard for G4S at the St. Lucie Courthouse in 2013.

According to the suit, Mateen told a deputy sheriff that he would have the terror group al-Qaeda kill the coworker’s family; bragged to a co-worker about being associated with the Boston Marathon bombers; told colleagues that he had family connections to terror group al-Qaeda and that he hoped law enforcement would raid his home so he could martyr himself. The suit says Mateen also praised Nidal Hasan, the Army major who shot forty-five people at Fort Hood.

Mateen was interviewed twice by the FBI, but they released him both times.

The lawsuit says G4S declined to re-evaluate Mateen, require any behavioral intervention, or suspend his ability to carry a weapon.

“Any of these actions may have resulted in Mateen’s dismissal and/or the revocation of his firearms license,” the suit says.

Attorneys working on the case said they are representing 57 victims or their estates. The suit itself lists seven estates of deceased victims.

“I stand here in disbelief that this man was able to make such comments and … was able to walk into a store and purchase so much ammunition,” said Wigberto Cintron-Capo, brother of Luis Omar Capo, who died in the attack.

“I feel angry when I think about the very clear warning signs that Omar Mateen gave,” said Kissimmee resident Ilka Reyes, who was shot nine times.